Between the White Hart, Iron Acton, and the Avon Valley Railway station at Bitton.
The route is the same both ways – no one-way sections.

Leaving the White Hart, there’s a fork in the road. Right is the main road, left is marked as a dead-end. Naturally you’ll go left. It’s a really nice cycle down to CoalPit Heath and Frampton Cottrell. Traffic is access only and you’re more likely to meet dog-walkers than cars. Take care going around blind corners! It’s very easy to skid when the lanes are wet and muddy. Quickly through Frampton Cottrell and Coalpit Heath.

Leaving CoalPit Heath, just after passing under the railway bridge, the road to the left, Ram Hill, leads to the remains of the Ram Hill colliary which is the start of the DramWay. This was one of the last of the horse-drawn ‘railways’ that carried coal from here, coalpit heath, down to barges of the river avon. We’ll follow the dramway for most of our way back to Bitton. 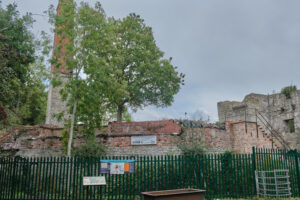 Forward a couple of miles to coxgrove hill, we’ll join the cyclepath that follows the dramway. Straight away we see evidence of the coal industry here at the 19th century steam-powered Brandy Bottom Colliery. It’s worth stopping and looking at all the information provided. We’re now just over 5 miles from our starting point, Bitton Railway station. After a couple of miles, we reach the remains of the old MangotsField railway station. 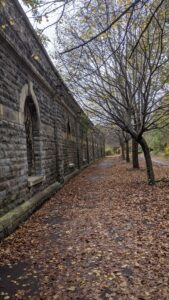 The ruins at this junction on the old railway line have a special atmosphere. John Grimshaw of Sustrans has celebrated this with trees, echoes of the old cast iron columns which once supported a vast glazed roof over the busy station. 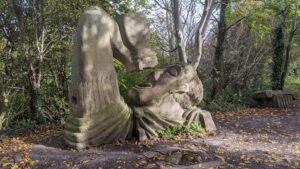 Carrying on leads you into Bristol, so we make a sharp left turn. Look our for Art installations as you go. 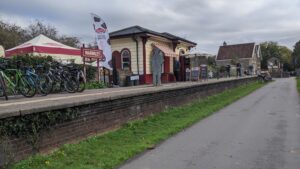 We pass the warmley waitingroom, a popular snacking place established in the old waiting room at Warmley station. Obviously popular for cyclists and walkers on the path. https://www.warmleywaitingroom.co.uk/

Past the oldland common railway station ,where the avon valley railway trains turn around to head back to Bitton.

As you approach the station, you may be lucky enough to see the steam train coming the other way.

A fitting end to our trip around the Avon Cycleway